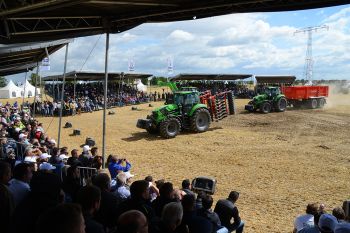 DEUTZ-FAHR presents the next generation of the 6 and 7 Series and introduces the new DEUTZ-FAHR Arena.

The future of tractor technology was on show in Dresden from 5 to 7 July 2016. Under the heading Future Farming 2016, DEUTZ-FAHR presented the next generation of tractors from the 6 Series and 7 Series at a major event.

Approximately 1,000 sales partners and more than 110 journalists from 28 countries were able to witness live and experience how the agricultural technology specialists from Lauingen an der Donau intend to meet the increasing worldwide demands for efficiency and productivity in the farming industry with the most innovative tractor technology ‘Made in Germany’.

At the heart of the Future Farming event was the next generation of the 6 and 7 Series tractors. Even at first glance, it is clear how DEUTZ-FAHR imagines the future tractor in these two performance ranges: a modern and compact design, extreme comfort and first-class technology in all aspects. The participants themselves were able to test the high-level innovation in the new tractor ranges with DEUTZ-FAHR staff support. Nineteen tractors of the new 6 and 7 Series, five 9 Series and the new combine C9206 TSB were available for live testing.

During the three days in the beautiful and historic German city of Dresden, the guests also had the opportunity to look at the DEUTZ-FAHR complete range of tractors from 35 HP to 340 HP, combine harvesters from 250 HP to 395 HP, telehandlers and forage harvesting equipment and advanced Precision Farming systems.

The new 6 and 7 Series, together with the 9 Series introduced in 2015, will represent the core production of the new DEUTZ-FAHR LAND in Lauingen an der Donau. This facility promises to be the most modern tractor factory in Europe, which is currently in its testing phase.

“These new high-end rangeof tractors are a result of the effort made in recent  years towards the completion and renewal of our product offering,” says Lodovico Bussolati, SDF Chief Executive Officer. “The new 6 and 7 Series, together with the 9 Series launched last year and the new innovative factory and customer centre in Lauingen, are fundamental pillars of the DEUTZ-FAHR strategy for the next few years.”